Fireplace City » About Us 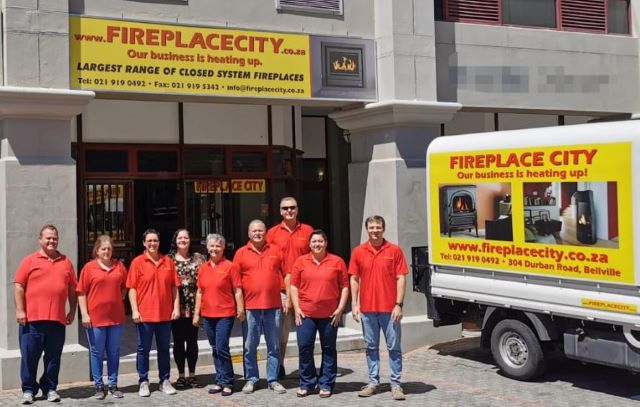 Ever the entrepreneur, Wrex Trollope entered the market in 1995 and opened Braais and Fireplace Centre on Durban Road in Bellville, retailing a range of open fireplaces and build-in braais. Wrex would boldly light a fire in a freestanding open fireplace outside his shop at 6am every morning to advertise his presence.

This budding business quickly gained popularity amongst builders and customers alike, and in 1999 Wrex set up INFERNO MARKETING cc and moved to a bigger showroom on Durban Road that quickly became known as “the little yellow house on the corner,” trading as Falcon Fires. A second Falcon Fires showroom was soon opened in Tableview, managed by Wrex’s eldest daughter, Samantha.  We quickly became the leading supplier of open fireplaces and braais in the Western Cape due to Wrex's strict policy of service excellence. (Our Tableview store closed in 2002).

Wrex’s staff compliment steadily grew, including his son-in-law, Vaughn, who joined in 2003. In 2004 we set foot into the closed system fireplace market with the Morso brand, and quickly became the main agent in the Western Cape. A year later it was decided to enlarge the product range to include popular fireplace brands from Europe. Wrex and his wife, Stephanie, spent 3 months traveling through Europe, visiting a host of manufacturers to find the best products for the South African market, and decided on Hunter, Hase, Austroflamm and SAEY, which are imported by our sister company, established in 2001. It was also at this time that we changed our trading name to FIREPLACE CITY to more accurately depict what we do.

The “little yellow house” was sold, Wrex established a showroom further up Durban Road and opened a small warehouse facility in Stikland, run by Stephanie, Justine and Samantha.  It was not long before we outgrew that warehouse, and we have upsized 3 times to larger premises since then.  Our current dedicated warehouse staff, Stephanie, Samantha, Bronwyn, Anthony and Lee, still work tirelessly to ensure that our customers are satisfied and that our promised back up service is maintained. We also established our own flue manufacturing facility in 2015.

In 2011 we opened a larger showroom at our current and well known premises at The Bridge Centre, 304 Durban Road, Bellville. Now, in 2018, with Wrex (owner extraordinaire), Vaughn (our resident technical expert) and Justine (who joined our showroom early in 2017, after managing the logistics of our warehouse for 10 years), we now boast 47 combined years of experience and expertise from which our valued customers can draw.  We now also include additional brands like Aduro, Solzaima, Fogo Montanha and Invicta which cater for every need and preference.

Our motto will not change;

Our amazing range of imported products is available throughout South Africa!

E-mails welcome all year round